The value of October plugins and plugin reviews 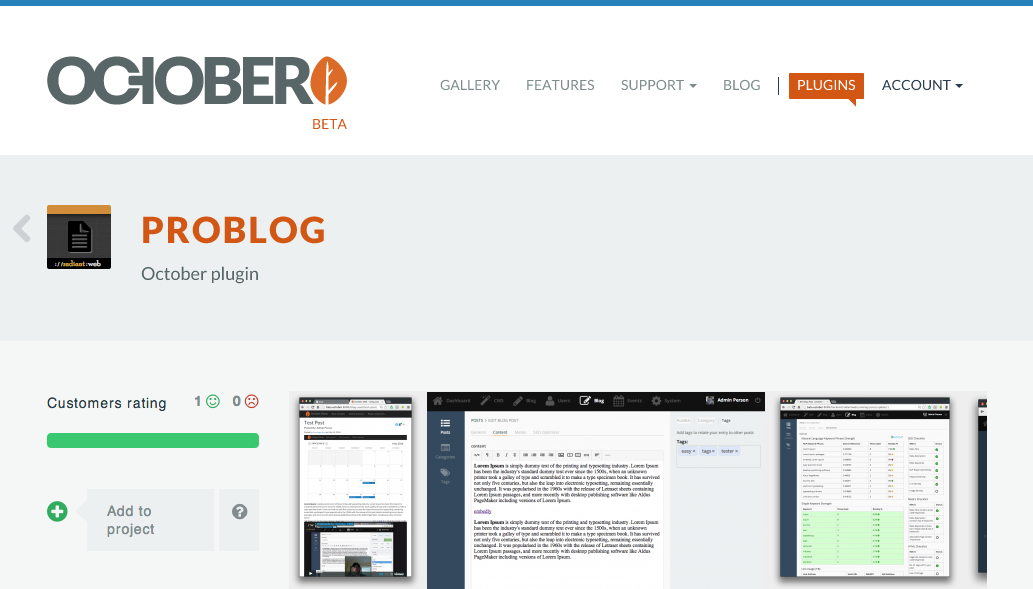 The October CMS Marketplace is a powerful way to extend your developer reach or even make a few bucks.  It's also a great way to get a massive jump on your next October project.

Below are just a few reasons why you should support, develop for, encourage, and utilize October CMS marketplace plugins.

You're just not that awesome

It's true.  You may be quite awesome.  But are you awesome enough to spend more time than money on any given project because your ego is to massive?

Many developers really struggle to justify spending $X on code because, well, they are awesome and can just do it themselves.

Ironically, in doing so they push themselves into the inevitable pool of "I have officially overcommitted myself" which consistently contributes to dev burnout.

Don't be that prideful.  You're just not awesome enough to do everything all the time.

Dropping $100 on October plugins does not qualify you as a lazy half-baked developer.  Just means you have more money than you have time.  Which so far as I know - is the case for every Laravel Developer out there.

October core team IS that awesome

When and if you do spend money on an October CMS plugin or theme, you are donating $X ( a scaling 30% ) to the core October dev team.

This, in part, is a funding resource to help keep the core team growing and investing back into the CMS as a whole.

As an October developer this should really resonate with you.  You want them to be funded.  You want others funding them.

So not only are October CMS Plugins a way to get a massive jump on project at hand, it's a way to show some love and pride in the platform and community as a whole.

When a newcomer arrives at octobercms.com for the first time, there will be a point where they determine the "health" of our beloved community.

The marketplace is a big part of that impression.

How many plugins? How many themes?  Do people actually use these?  Do they have good reviews?  What is the quality of developer community that we are looking at here?

These are questions that any reasonable person would ask themselves as they try and determine "is October CMS the right platform to develop websites and/or applications on?".

It's imperative that we/you as developers and designers make it a point to leave positive and encouraging reviews and possibly even go download licenses of everything at least once so that you can go leave feedback.

It goes without saying that if the goal is to leave a good impression on newcommers, we want more positive feedback than negative.

Developers can tend to be overly-critical by nature...or even arrogant ( "this sucks...I could do this better!!!" ) So when/if your initial inclination is to bash someones plugin, try instead leaving a positive statement as well as a cursory "I maybe would have preferred this to have XYZ, but all in all this is a fantastic contribution to the marketplace."

Be thoughtful.  Go try plugins.  Leave constructive feedback while at the same time being uplifting and encouraging.  Lets show the greater CMS world what a great community we have here over at October CMS.